Do you know how the Salon du Chocolat came to be? Let’s tell you all about it!

It all started with a love story….

Sylvie Douce was running an event management firm. The idea of creating a show based on chocolate suddenly came to her and, at a dinner in 1994, she discussed her project with François Jeantet, an architect and food critic. After all, they shared the same passion for chocolate! … “It’ll never work!“, “What an idea?! “, “What? A Chocolate Show?”….

Even though others in the industry had their doubts, the couple decided to go ahead and inaugurate the 1st edition of the Salon du Chocolat on 28 October 1995, featuring 40 pioneering exhibitors at the Eiffel Branly convention centre.

It was a resounding success, with 40,000 visitors! Today, the Salon du Chocolat in Paris welcomes 110,000 visitors and 230 exhibitors from all over the world.

Major television networks promoted the event and audiences queued up over five blocks, bringing the traffic in an entire Manhattan neighbourhood to a standstill! 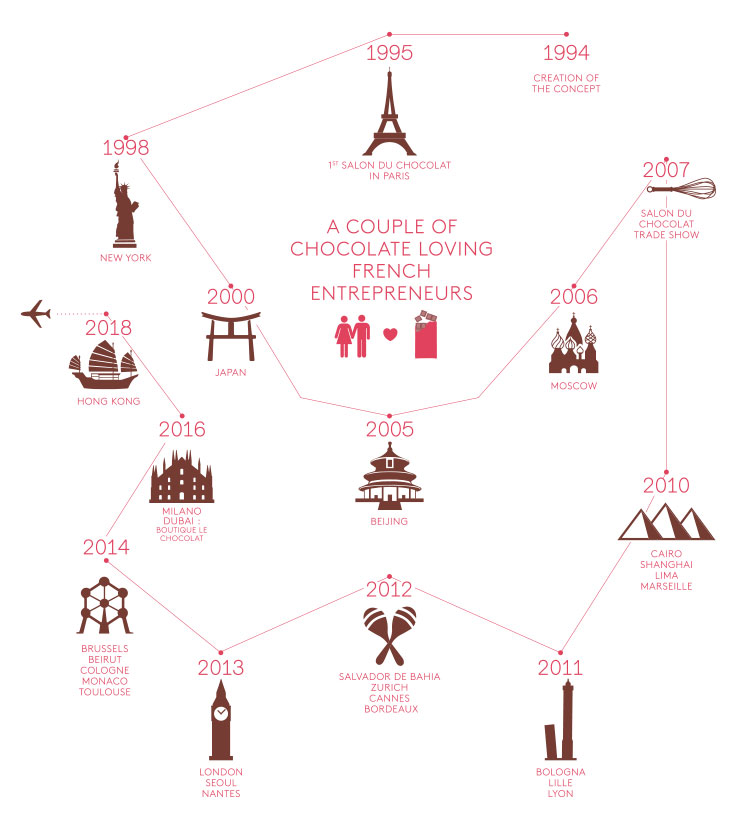 After the United States, the Salon headed for Asia, a region with traditionally little interest in desserts and a relative newcomer to the wonder of chocolate.

Tokyo was the first city to succumb to the charms of the chocolate show. In 2002, the Salon du Chocolat signed a historic partnership with the Isetan department store chain and expanded into several major Japanese cities.

The Show then set off to conquer the largest cities in France and abroad.

The Salon du Chocolat has been held 237 times since its creation, with some fifteen events held every year on four continents.